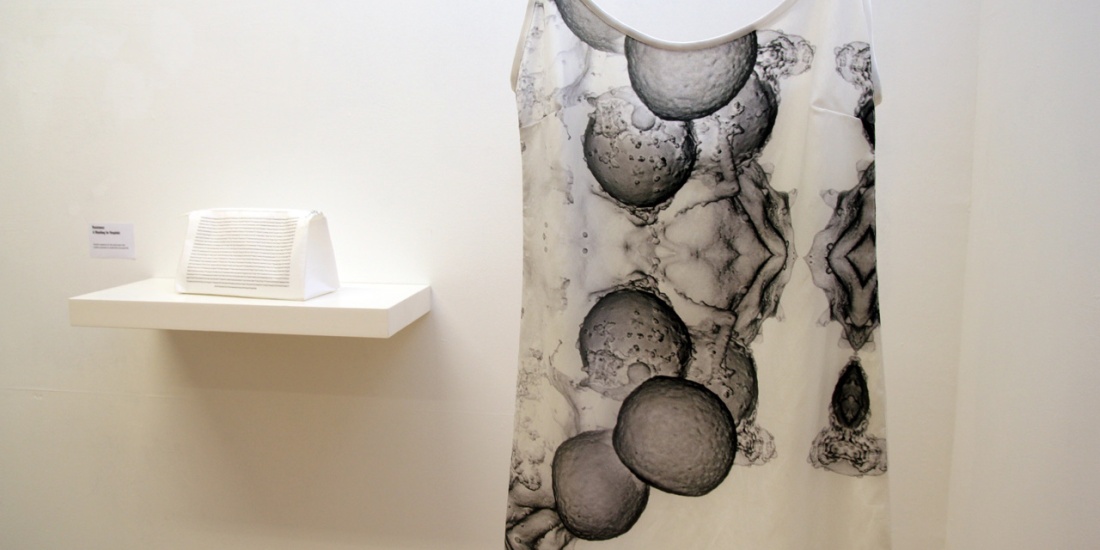 A residency at the Centre for Immunity, Infection and Evolution in Edinburgh explored the adaptive strategies of pathogens and the evolution of antibiotic resistance in bacteria. This informed Edges : Surface : Borders which considers the wider implications of human co-existence with microbial life.The work looks at two different pathogens; the Staphylococcus aureus bacteria that lives commensally on 30 percent of the human population, but causes problems in hospital settings (MRSA) and severe acute respiratory syndrome (SARS).

Using out of gallery interventions, manipulated objects and speculative design, the transmission of these pathogens are explored in both historical and contemporary cultural settings. In illuminating aspects of the microbiology and ecology of these microscopic organisms, the work sheds light on how contemporary society continues to be challenged by the evolution of the microbiological world.

Jo was an invited speaker at the Art, Design and Antimicrobial Resistance discussion event at LifeSpace Gallery, Dundee. 01/09/2015 “Antimicrobial resistance (AMR) is the ability of microbes  to evade treatment by antibiotics and other drugs. This is an increasing threat to global health as new resistance mechanisms emerge and spread across the world. Microbial life has long captured the interest of many artists. So what can artists contribute to the interdisciplinary approach required to both tackle antimicrobial resistance, and increase public awareness of this important issue?”

Millions of bacteria exist alongside, on and within us and every other organism on earth.  Current research is enabling new insights into the complex relationships that exist between us and these organisms. As our understanding deepens, should we consider developing new ways of understanding ‘self’ and ‘non-self’ to include these forms of life that colonize, replicate, and evolve within us?.

Alongside these commensual and mutualistic organisms, there are many that cause, or have the potential to cause, ill health and disease. Their constant evolution provides an ongoing challenge to scientists and health care providers. Our own role in the spread of drug resistant bacteria fuelled by the overuse of antibiotics, has added another uneasy layer to the complex interplay between science and the microbial world. Does the rising sense of alarm about the risks posed to us when we are at our most vulnerable create a new sense of human fragility? Have we really undermined almost a century of medical advances through the misuse of antibiotics to such an extent that our medical facilities themselves have become contested landscapes?

The science of the hospital bed – The Staphylococcus aureus bacterium.

A work in collaboration with Dr Melissa Ward, Centre for Immunity, Infection and Evolution. http://ciie.bio.ed.ac.uk/melissa-ward

“Resistance to antibiotics poses a major global threat to public health”. World Health Organization 2014
“A post-antibiotic era means, in effect, an end to modern medicine as we know it. Things as common as strep throat or a child’s scratched knee could once again kill”. Margaret Chan. World Health Organisation 2012

Staphylococcus aureus (S. aureus) is a bacterium found on 30 percent of people in the respiratory tract (mainly the nose) and on the skin. It is not always pathogenic, but is a common cause of skin infections, respiratory disease and food poisoning. The evolution of antibiotic-resistant forms of pathogenic S. aureus e.g. MRSA (methicillin resistant S. aureus) is a worldwide problem in hospital settings where patients with open wounds, invasive devices, and weakened immune systems are at greater risk of infection than the general public.

The evolution of resistance does not cause the organism to be more intrinsically virulent, but it does make MRSA infection more difficult to treat with standard types of antibiotics and is thus more dangerous. MRSA can survive on surfaces for some time; up to 56 days on polyester, the fabric from which hospital curtains are often made. It is however most commonly passed via hands, and is killed by alcohol based hand washes.

The gene that allows a bacterium to be resistant to antibiotics such as methicillin and penicillin is the mecA gene, which is located on a mobile genetic element within the bacteria. The ability to transfer this gene from one bacterial species to another coupled with high replication rates, allow bacteria to develop antibiotic resistance and to spread it quickly.

The mecA gene is spread by both horizontal gene transfer; the transference of genetic information from an organism that is not its parent and is typically a member of a different species, and by vertical gene transfer, which in bacteria involves the transmission of genes from parents to offspring via asexual reproduction.

‘Waiting’. Work showing mutation mechanism of the mecA gene. Thanks to Dumfries and Galloway Royal Infirmary for access for photography.

Pathogens have followed trade routes across the world for as long as these routes have existed, from the spice roads to the slave trade, we have transported microbial life across borders and oceans. These pathogens change and evolve during their journey, with sometimes catastrophic consequences. The SARS outbreak of 2002/3 illustrated not only that this linkage still exists, but is amplified by the globalization of trade and widespread air travel. Even money, the essential component of trade and the most physically touched object in human culture, provides a rich environment for the transport of bacteria, fungi and viruses.

The spread of a pattern or design seems to echo this process;  a motif or decorative element that started life on the side of a clay pot in ancient Persia reappears, hundreds of years later, subtly changed on Chinese plates bound for Amsterdam. After moving through the dining rooms of Europe, it changes again reappearing as a wallpaper design in the living rooms of Paris. Design ideas cross borders, oceans, continents, and social classes – sometimes killed off by fashion, sometimes revived by the same process. Pathogens and ideas both seem to move through human cultures fluidly, adapting and evolving to new circumstances and creating seemingly endless new niches and opportunities.

The SARS coronavirus was the pathogen responsible for the SARS outbreak of 2002/3. It crossed species from bats to civets to humans in China and spead to more than 24 countries in a matter of months before it was contained.

DISEASE: “Walking downtown I saw people walking towards me in face masks, it was freaky – this was clean, boring Toronto.  Over governed, over controlled Toronto. People were cancelling visits. On one news channel in the States we were called a Plague City”. Toronto Residents

DESIGN: “I created that pattern for a mobile phone cover and within months it was everywhere, I saw it on toys, on t-shirts,  it was even on a tea cosy! I expect to be copied these days –  I just work quicker!” . Frida Aimes. Designer

TRADE: “Sleeping in hotel rooms all year all over the world becomes a little strange after a while, it feels that the rooms are the point of the journey, rather than the business meetings I am paid to go to”. Salesman

Money is the most touched human object and provides a rich environment for the transport of bacteria, fungi and viruses. We took swabs from three different bank notes, cultured them in the CIIE laboratories and displayed the resulting growth of bacterial and fungal microorganisms. (The actual cultures were not able to be taken out of the lab on safety grounds so we photographed them and overlaid them on the banknotes.)

Residency at the CIIE